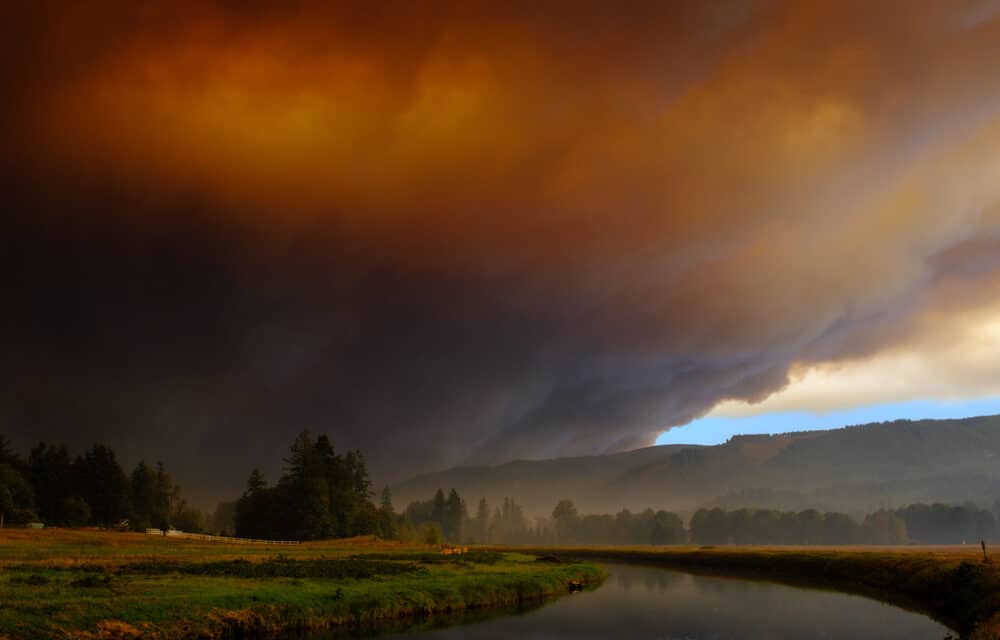 The Bootleg Fire in Oregon, which erupted in early July and is still only 25 percent contained, has now charred an area the size of Los Angeles, destroying at least 67 homes and 100 buildings.

Smoke and heat from the out-of-control blaze have created “fire clouds” that can be seen from more than 100 miles away. One of the clouds threw embers onto fire crews working below, leading to an emergency evacuation of personnel off the fire line. Numerous “slop fires” have jumped fire lines, with one growing to about four miles in size as of Monday afternoon.

“We are running firefighting operations through the day and all through the night,” incident commander Joe Hessel told the Associated Press. “This fire is a real challenge, and we are looking at sustained battle for the foreseeable future.”

At the same time, wildfires continue to rage elsewhere in California and along the Canada-Minnesota border. Hotter, drier weather simply means more wildfires, according to Phillip Duffy, executive director of the Woodwell Climate Research Center. MORE

As hot, dry weather conditions continue to fuel wildfires across much of the United States, the Bootleg Fire in Oregon has become so intense that it’s creating its own weather.

The fire has scorched more than 606 square miles — an area larger than Los Angeles and about half the size of Rhode Island. It grew to more than 388,350 acres overnight from Monday to Tuesday and is 30% contained, according to data from the InciWeb interagency website.

It’s one of at least eight large fires burning in Oregon and one of at least 83 burning across 13 states, according to the National Interagency Fire Center. The climate crisis has made deadlier and more destructive wildfires the new normal.

“There’s absolutely no question that climate change is playing out before our eyes,” Gov. Kate Brown said at a news conference. “We saw the heat dome event a few weeks ago. We, unfortunately, lost a lot of Oregonians through that event. In February we saw devastating ice storms. Over half a million people lost power last fall, as you are well aware. We had unprecedented wildfires.” MORE