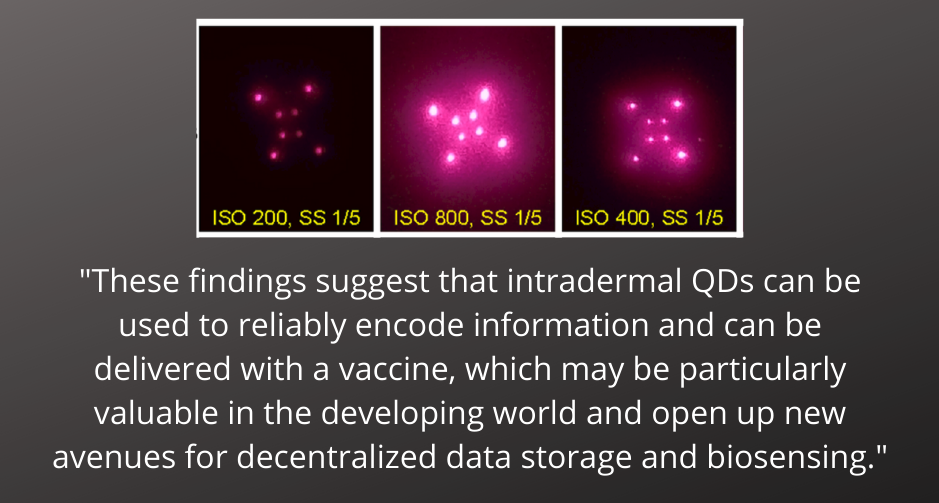 #WatchandPray It is imperative that you are educated and informed on what you are putting into your body. Educate yourself and know exactly what the ingredients are before trusting the urgent push by the media to get vaccinated.

The Bill and Melinda Gates Foundation has donated more than $21 million towards developing a vaccine technology that uses a tattoo-like mechanism which injects invisible nanoparticles under the skin that is now being tested in a vaccine against the virus that causes COVID-19.

The microneedle technology is also being wed to injectable technology, funded by the Bill and Melinda Gates Foundation, which embeds under the skin a vaccination record visible by near infrared light that can be read by smartphone technology.

The Bill and Melinda Gates Foundation is funding the technologies with aims to enable “house-to-house” vaccine campaigns undertaken by people with “minimal training.”

Researchers from the University of Pittsburgh reported in their study published April 1 in EBiomedicine, a Lancet Journal, that their microneedle patch vaccine against the SARS CoV-2 virus that causes COVID-19  “prompted robust antibody production in the mice within two weeks.” [ICWA note for thought: robust antibody production has not been a problem with experimental vaccines in this virus family–the problem has been with “pathogenic priming” or “immune enhancement.” Exposure to some vaccines can have the opposite effect intended, causing the vaccinated person to be at high risk of serious disease when later exposed to the wild virus or a virus in the same family.)

The patches resemble a spiky piece of Velcro, with hundreds of tiny microneedles made of sugar. The needles prick just into the skin and quickly dissolve, releasing the vaccine into the tiny abrasions and inducing a potent immune cell response despite the minute amount of the vaccine material – far more potent than an intramuscular injection. [ICWA note for thought: is a potent immune cell response always a good thing? The natural process of wild infection-exposure leads to a complex immune response that is usually in balance and controlled and self-limiting. What happens when through an unnatural entry point–injection with a standard needle or micro needles–a potent “foreign” immune response is triggered?]

The researchers had been testing vaccines using the microneedle patch for other coronaviruses, including the one that causes Middle East Respiratory Syndrome (MERS) and reported that three different experimental MERS vaccines induced the production of antibodies against the virus. These responses were stronger than the responses generated by regular injection of one of the vaccines along with a powerful immune stimulant (an adjuvant). Antibody levels continued to increase over time in mice vaccinated by microneedle patch—up to 55 weeks, when the experiments ended. The researchers have now turned their technology to the COVID-19 virus, SARS CoV-2. [ICWA note for thought: What is the long term effect of unnaturally increasing antibody levels for more than a year? Have there been any studies?]

“Testing in patients would typically require at least a year and probably longer,” senior co-author of the study, dermatology professor Louis Falo said. “This particular situation is different from anything we’ve ever seen, so we don’t know how long the clinical development process will take. Recently announced revisions to the normal processes suggest we may be able to advance this faster.” [ICWA note for thought: Testing in patients for even a year is not nearly long enough to learn the side effects, risks, and unintended consequences of artificially provoking the immune system with a new product. This has been a major complaint against the vaccine industry and FDA regulations for licensing. Speeding up testing requirements which are already far too fast cannot lead to any useful safety data. An immune reaction that takes weeks, months, or a few years to be recognized (if ever since we lack a robust surveillance system and vaccine-injury denial is heavily marketed) and in populations not chosen for clinical trials, cannot be forced to the surface by any timeline. Rushed vaccine development turns the entire population into laboratory animals, and the current marketing of fear intended to coerce people into compliance violates the Nuremberg Code, the UN Declaration of Human Rights, and many Federal Regulation Codes pertaining to Clinical Trials.]

Another study funded by the Bill and Melinda Gates Foundation and published in December, 2019 by researchers from the Massachusetts Institute of Technology, the Institute of Chemistry of the Chinese Academy of Sciences in Beijing and the Global Good, Intellectual Ventures Laboratory in Bellevue, WA, describes how “near-infrared quantum dots” can be implanted under the skin along with a vaccine to encode information for “decentralized data storage and bio-sensing.”

Accurate medical recordkeeping is a major challenge in many low-resource settings where well-maintained centralized databases do not exist, contributing to 1.5 million vaccine-preventable deaths annually. Here, we present an approach to encode medical history on a patient using the spatial distribution of biocompatible, near-infrared quantum dots (NIR QDs) in the dermis. QDs are invisible to the naked eye yet detectable when exposed to NIR light. QDs with a copper indium selenide core and aluminum-doped zinc sulfide shell were tuned to emit in the NIR spectrum by controlling stoichiometry and shelling time. The formulation showing the greatest resistance to photobleaching after simulated sunlight exposure (5-year equivalence) through pigmented human skin was encapsulated in microparticles for use in vivo. In parallel, microneedle geometry was optimized in silico and validated ex vivo using porcine and synthetic human skin. QD-containing microparticles were then embedded in dissolvable microneedles and administered to rats with or without a vaccine. Longitudinal in vivo imaging using a smartphone adapted to detect NIR light demonstrated that microneedle-delivered QD patterns remained bright and could be accurately identified using a machine learning algorithm 9 months after application. In addition, codelivery with inactivated poliovirus vaccine produced neutralizing antibody titers above the threshold considered protective. These findings suggest that intradermal QDs can be used to reliably encode information and can be delivered with a vaccine, which may be particularly valuable in the developing world and open up new avenues for decentralized data storage and biosensing.” (emphasis added)

The authors go on to say in the discussion portion of the paper:

“To maximize the utility of this technology for vaccination campaigns, we aimed to create a platform compatible with microneedle-delivered vaccines that could reliably encode data on an individual for at least five years after administration,” said the MIT paper, titled Biocompatible near-infrared quantum dots delivered to the skin by microneedle patches record vaccination. “ In addition, this system also needed to be highly biocompatible, deliver a sufficient amount of dye after an application time of 2 min or less, and be detectable using a minimally adapted smartphone.”

[ICWA note: the concept of tagging and tracking humans should remain in the plots of science fiction novels. They have no place in a free and just society.]

“Its business model has a focus on buying patents and aggregating them into a large patent portfolio and licensing these patents to third parties,” according to Wikipedia.  The company has been described as the country’s largest and most notorious patent trolling company.

The website of the Bill and Melinda Gates lists multiple grants awarded to develop the “microneedle array patch” – for use in  “house-to-house campaigns via administration by minimally-trained personnel.”

The most recent grant for $370,035 was awarded in February, 2020 to the Centers for Disease Control and Prevention for an MMR vaccine patch that does not require refrigeration and “enables house-to-house campaigns” via people without medical experience or training. [ICWA note for thought: If the concept of “house-to-house campaigns” doesn’t alarm you, we suggest you read the history of totalitarian governments. Never relinquish your American right to political, religious, and medical freedom.]

Bill Gates has awarded much larger grants for microneedle array patch technology to companies and organizations including:

Gates began funding the implantable biotechnology back in 2011 via a small ($100,000) grant to the Santa Cruz based company TransDerm Inc whose Linkedin page links to a website for the pharmaceutical giant Allergan.

Last month Reuters news service reported – falsely — that a popular Facebook post about Bill Gates planning to use microchip implants to fight the coronavirus pandemic was a “false claim.” The news service linked to the censored Facebook post.

Gates, whose father was the director of Planned Parenthood Federation of America and mother worked for PPFA’s funding affiliate United Way, has been noted for his population control ideology. His wife, Melinda Gates, launched a Family Planning Summit on World Population Day in 2012 with the aim of garnering tax dollars from governments to expand reproductive health services aimed at lowering the global birth rate.

➤A final ICWA note for thought: While the Gates Foundation and the Pharmaceutical Industry spend billions to push the world toward a dystopian vision of making every human on the planet a “chipped” and trackable lifetime customer, the cure for COVID-19 and other communicable infections are quietly protecting and healing. We encourage everyone to read, think, act. Optimize Your Health and Protect Your Freedom. The power is yours. Never hand it over to anyone else.