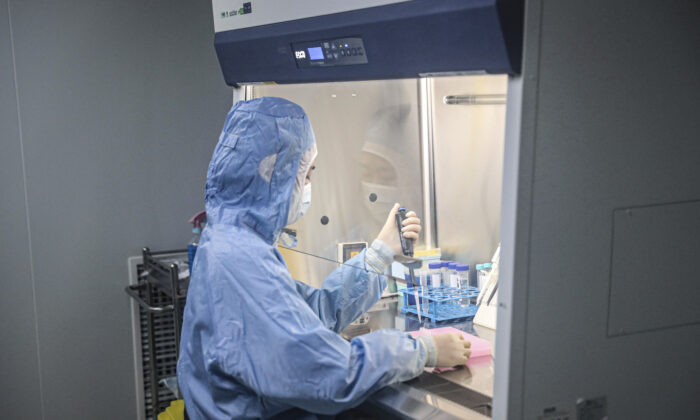 Share on facebook
Share on twitter
Share on linkedin
#WatchandPray Revelation 6:8 King James Version
8 And I looked, and behold a pale horse: and his name that sat on him was Death, and Hell followed with him. And power was given unto them over the fourth part of the earth, to kill with sword, and with hunger, and with death, and with the beasts of the earth.

A new, potentially more contagious strain of the CCP virus that causes COVID-19 was confirmed in Colorado—the first time it’s been detected in the United States, according to health officials.

Health officials in the state informed the U.S. Centers for Disease Control and Prevention (CDC) about the strain, discovering it in a man in his 20s in Elbert County. Authorities said the man doesn’t have a history of travel.

The variant, B.1.1.7, is the same as the one discovered in the United Kingdom, according to officials.

“There is a lot we don’t know about this new Covid-19 variant, but scientists in the United Kingdom are warning the world that it is significantly more contagious,” Colorado Gov. Jared Polis said in a statement Dec. 29. “The health and safety of Coloradans is our top priority and we will closely monitor this case, as well as all COVID-19 indicators, very closely.”

UK authorities said the new variant of the CCP (Chinese Communist Party) virus is the reason for the increase in infection rates in London and southeastern England, adding that it’s more easily transmitted than previously identified strains of the SARS-CoV-2 coronavirus. They said there’s no evidence that the variant makes people sicker.

“I want to thank our scientists and dedicated medical professionals for their swift work and ask Coloradans to continue our efforts to prevent disease transmission by wearing masks, standing six feet apart when gathering with others, and only interacting with members of their immediate household,” Polis also said in the statement, adding that health officials “are working to prevent spread and contain the virus at all levels.”

Health officials are working to find other possible cases of the new variant, Polis said.

Earlier in December, the CDC said the B.1.1.7 variant could already be circulating undetected in the United States. The CDC called the strain, “SARS-CoV-2 VUI 202012/01.”

“Ongoing travel between the United Kingdom and the United States, as well as the high prevalence of this variant among current UK infections, increase the likelihood of importation,” the CDC said in a statement on Dec. 19. “Given the small fraction of US infections that have been sequenced, the variant could already be in the United States without having been detected.”

The agency noted that so far there have been a number of mutations of the CCP virus.

“Among these possibilities, the last—the ability to evade vaccine-induced immunity—would likely be the most concerning because once a large proportion of the population is vaccinated, there will be immune pressure that could favor and accelerate emergence of such variants by selecting for ‘escape mutants,’” the CDC said.

“There is no evidence that this is occurring, and most experts believe escape mutants are unlikely to emerge because of the nature of the virus.”